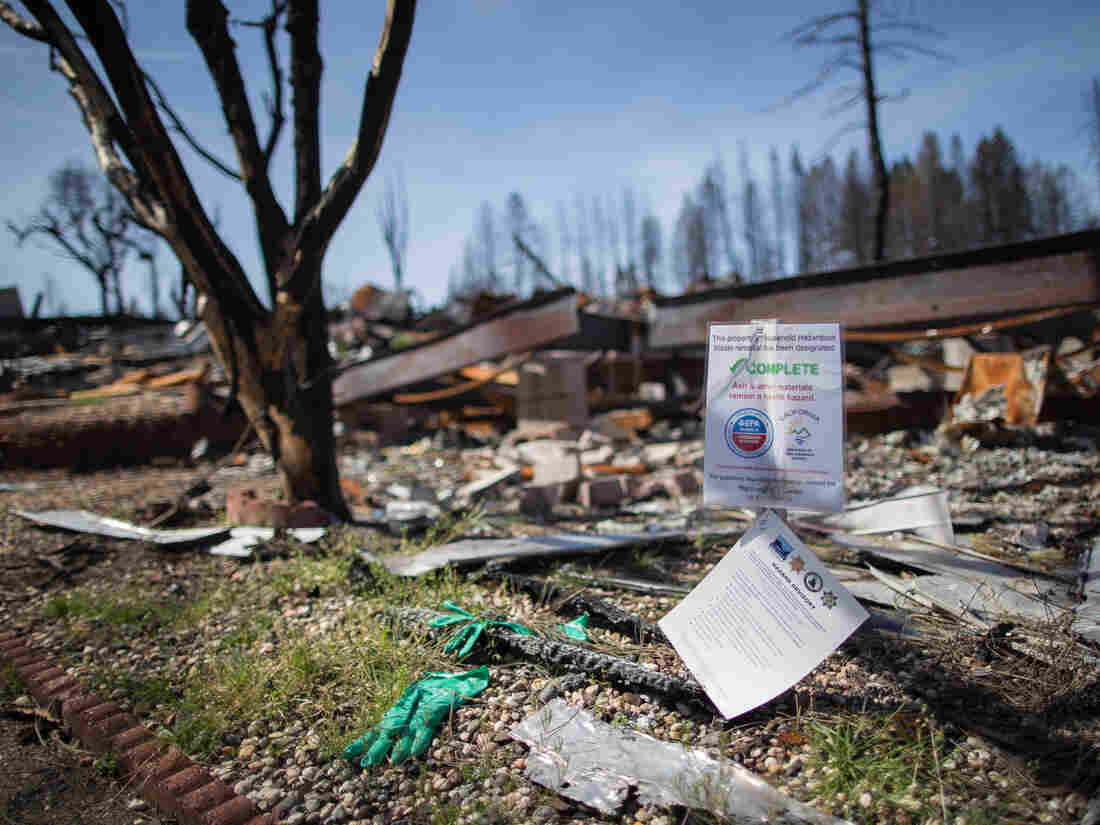 A mobile home park destroyed by last year’s wildfire in Paradise, California. Those rebuilding homes and lives say they’re getting contradictory messages about whether the water is safe to drink. 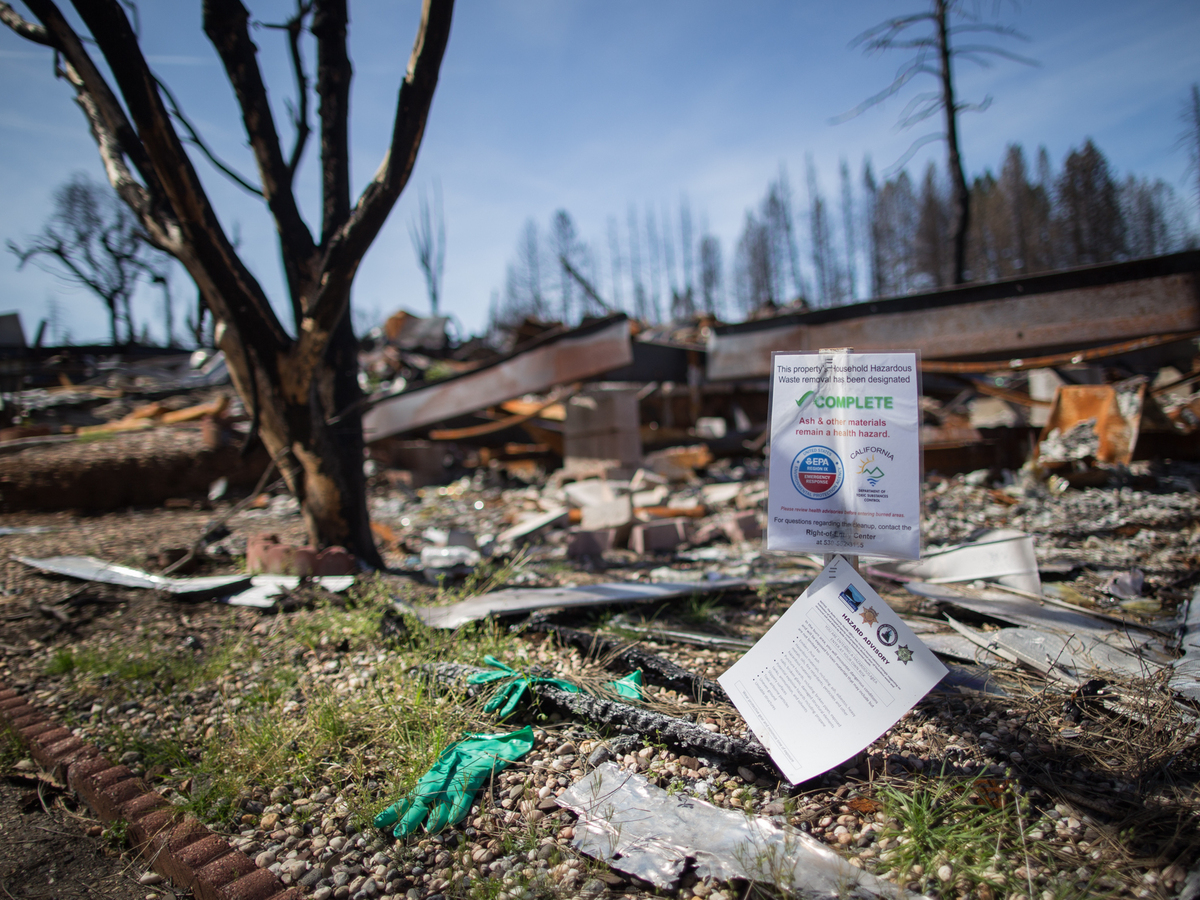 A mobile home park destroyed by last year’s wildfire in Paradise, California. Those rebuilding homes and lives say they’re getting contradictory messages about whether the water is safe to drink.

Tammy Waller thought she was one of the lucky ones after her home in Magalia survived California’s most destructive wildfire ever, but her community remains a ghostly skeleton of its former self.

Waller remembers the day she came back home after the Camp Fire.

“When I first walked in, I went to my kitchen sink and turned on the water, and it was just literally black,” Waller says.

After the fire, scientists detected dangerous levels of cancer-causing benzenes from burned plastics in some water lines. Recent tests show the problem has not gone away. Chronic exposure to benzenes can heighten the risk of blood cancers such as leukemia.

Today, Waller’s taps are running clear, and she has been told the water is safe to drink. But less than a half-mile away, in a neighborhood destroyed by fire, the water isn’t considered safe. And the pipes there are part of the same system that brings water to Waller’s neighborhood.

“It’s not a risk I want to take to drink it,” Waller says. 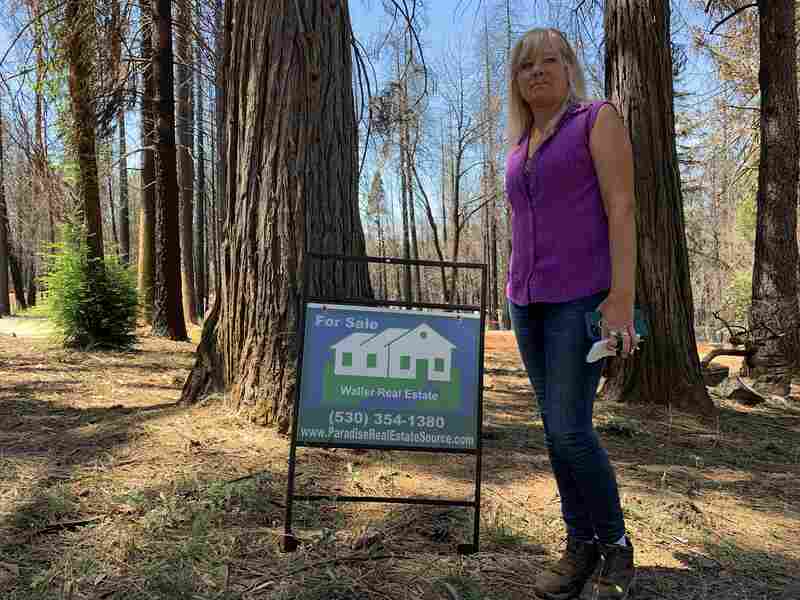 Tammy Waller, a real estate agent in Magalia, Calif., says her livelihood is directly affected by the water crisis following the Camp Fire. 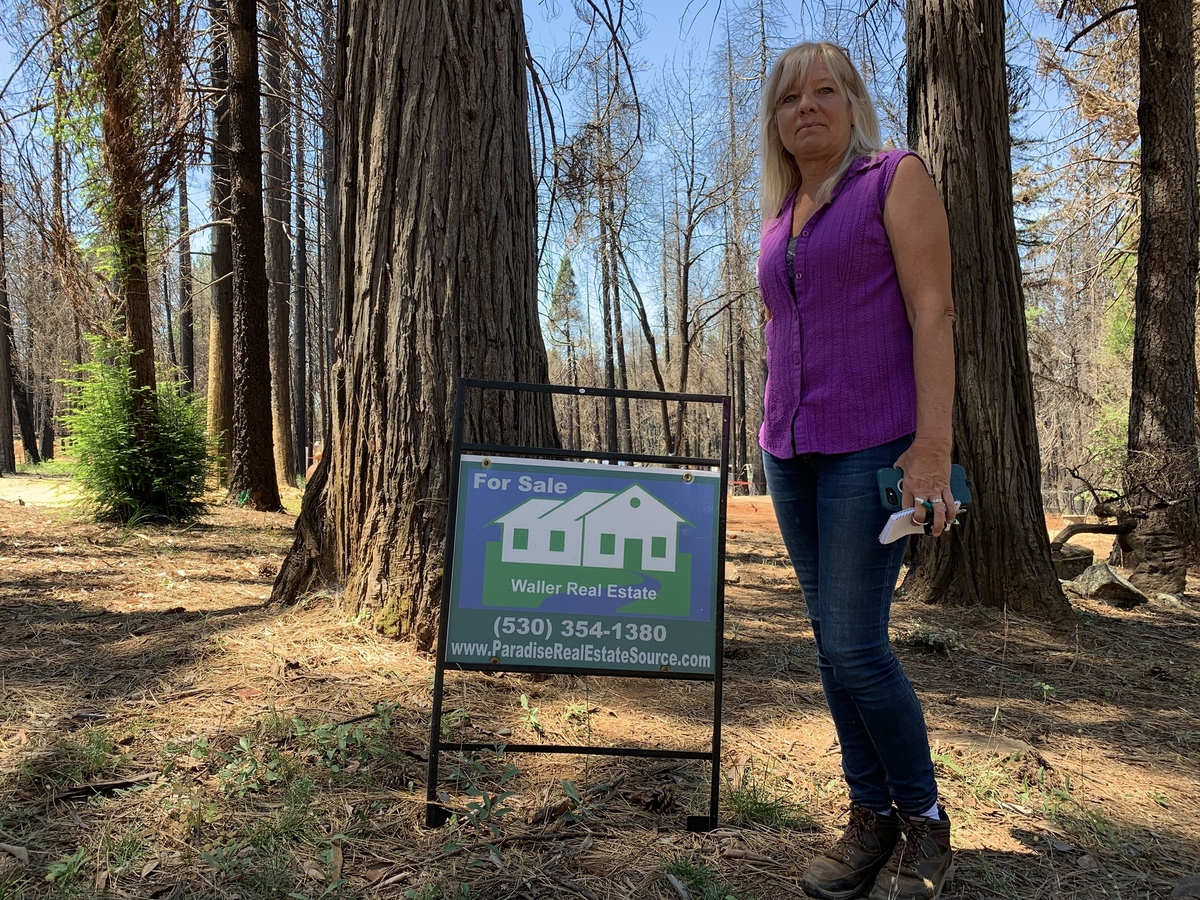 Tammy Waller, a real estate agent in Magalia, Calif., says her livelihood is directly affected by the water crisis following the Camp Fire.

Fire survivors like Waller are frustrated by the mixed signals from state and local officials. It’s not always clear which water is safe, who’s at risk and who isn’t.

The publicly owned utility, the Paradise Irrigation District, is advising its customers to use bottled water for almost everything: drinking, cooking and brushing teeth.

But the smaller, private Del Oro Water Company says its water, going to standing homes like Waller’s, is safe to drink.

Purdue University engineer Andrew Whelton, an expert on rebuilding water infrastructure after disasters, consulted with the Paradise Irrigation District in the immediate months following the Camp Fire. He says there hasn’t been enough stringent testing across the burn zone to ensure people aren’t being exposed to danger.

“Nobody should encounter these types of decisions following a disaster, because it’s not their fault that this happened,” Whelton says

The state of California also didn’t issue its water safety guidelines to homeowners until June. Whelton and other academics have argued that those guidelines are inadequate, saying that at times they even appear to rely on expertise from a water industry trade magazine, not scientific research.

At the California State Water Resources Control Board in Sacramento, state officials defend their efforts in the recovery so far. Board toxicologist Bruce Macler told NPR he’s pretty confident that after more recent stringent testing, the water being delivered to homes where people are living is safe and that the risk of contamination in plumbing above the legal standard is minimal.

“While we know that there was contamination there and we have some very high levels, worrisome levels, we also know nobody’s drinking that water and they never will,” Macler says.

The fact that it’s a big disaster is no excuse anymore.

It’s not clear how the state can be sure of that.

The reassurances of regulators are of little solace to fire survivors who say that government agencies are taking a cavalier attitude toward public health. But Macler says state drinking water regulators can do only so much in Paradise: They have the authority to regulate water only up to the point where water enters private homes.

“The Safe Drinking Water Act, the federal level and the state equivalent of it, stops at the meter. Congress did not ask us to go into people’s homes,” Macler says.

The privately run Del Oro Water Company will test water inside homes that survived the fire at a customer’s request, for a $70 charge. 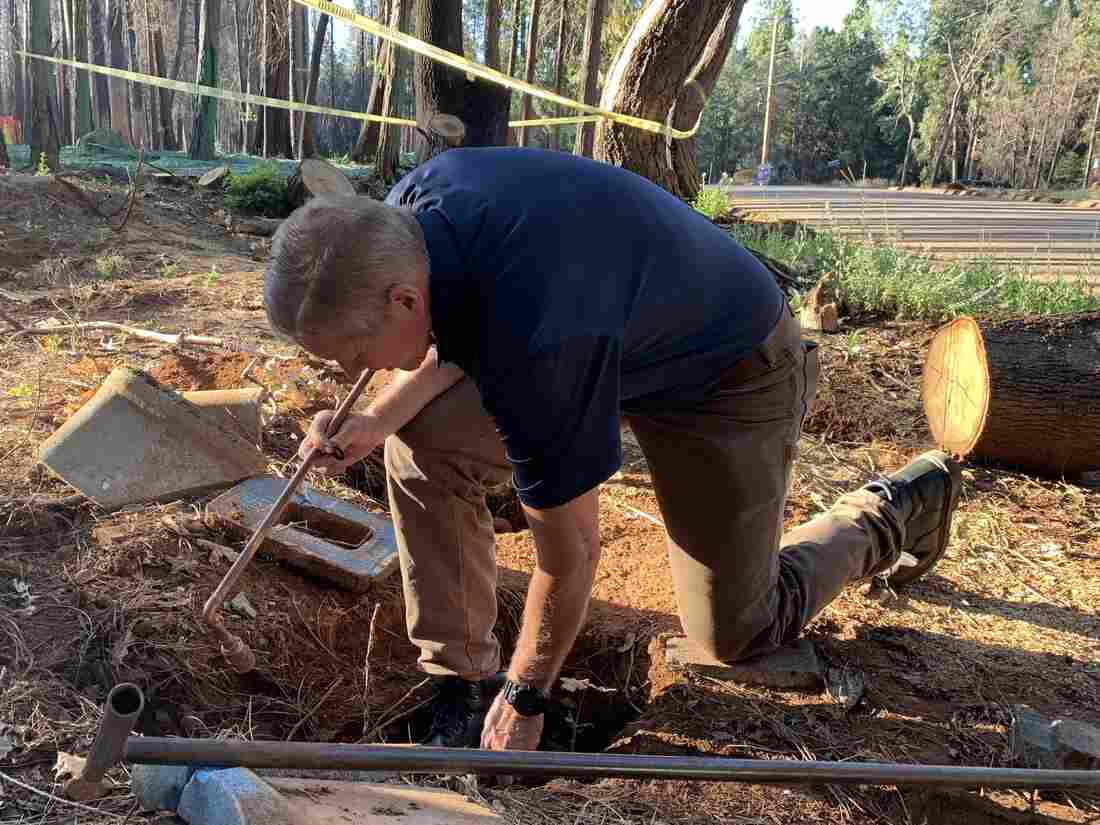 Jim Roberts, assistant superintendent at Del Oro Water Company, has lived and worked in Magalia for 40 years. He taps a water main to take a sample on a burned property. 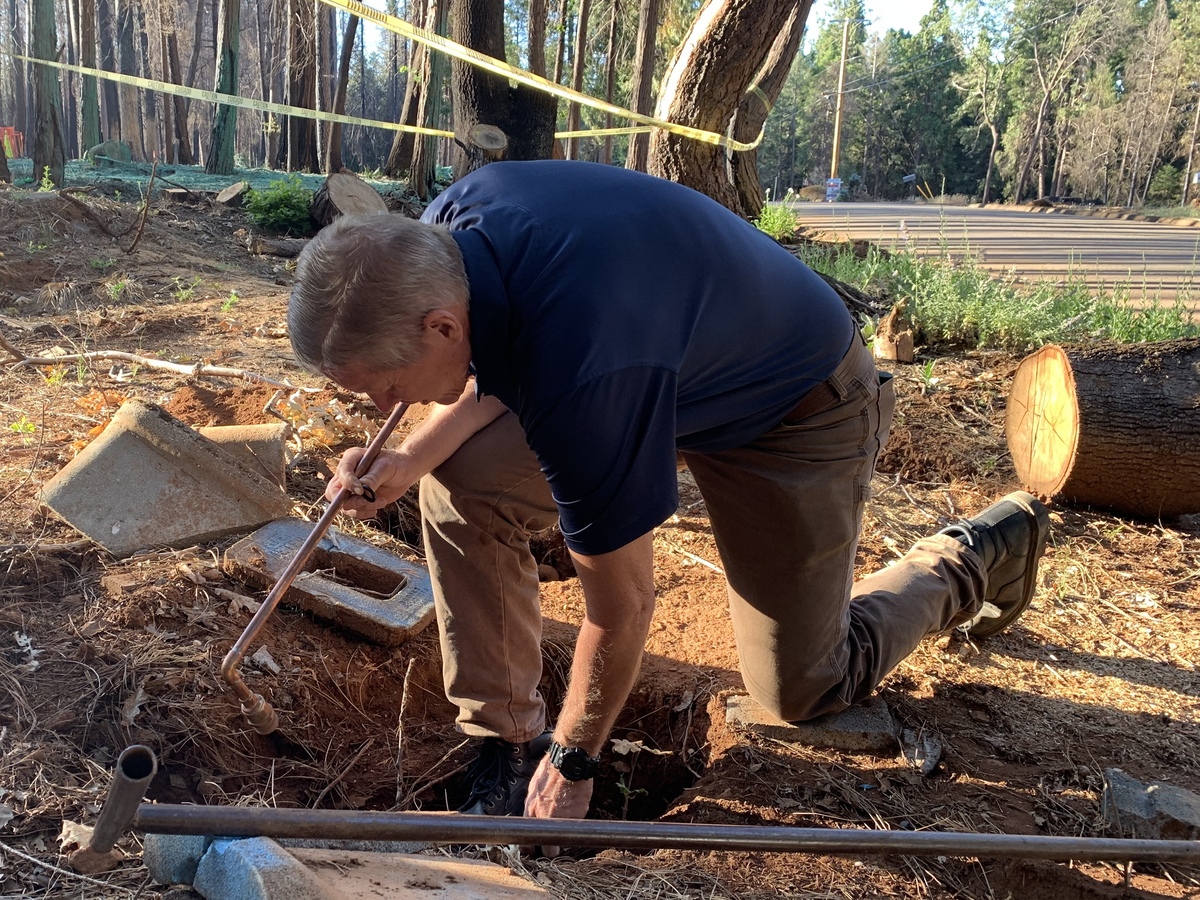 Jim Roberts, assistant superintendent at Del Oro Water Company, has lived and worked in Magalia for 40 years. He taps a water main to take a sample on a burned property.

In Magalia, Del Oro’s assistant superintendent, Jim Roberts, takes a sample from a worried customer’s kitchen sink. He says the bottle will get shipped to a lab, but in the meantime, everything should be fine.

Roberts says the water going to inhabited homes like this one is safe because Del Oro has been doing rigorous flushing of its system since the fire. Like so many others, Roberts lost his home in Magalia in the Camp Fire. He and his wife recently bought a new place about a half-mile away from their burned property. The water tested OK, and they’re drinking it.

“I’ve gone to several houses where people will say they’re concerned,” Roberts says. “Especially being a resident here myself, I wouldn’t be consuming the water if I didn’t feel it was safe.”

But Roberts says a wildfire taking out a whole city’s infrastructure — in total, the Camp Fire burned nearly 19,000 structures and displaced some 50,000 people — is new territory. Once a month, the company is flushing its systems on uninhabited, burned lots as a precaution.

“And as long as we feel there’s any risk of any services containing any contamination, we’re going to continue to flush,” Roberts says. “So we don’t know how long that’s going to be. It could be years.”

For fire survivors such as Waller, patience is wearing thin. She recently had her water tested, and the results came back this week showing all clear. She plans to do more tests, though, and will continue drinking bottled water for now.

“This is all new, and for that I can give, definitely, some leeway,” Waller says. “My thing is, it’s OK to say you don’t know.”

Whelton at Purdue is more blunt. He has long advised the U.S. military on rebuilding water infrastructure.

“The fact that it’s a big disaster is no excuse anymore. Because what you do in disasters is you force augment,” Whelton says. “You go get supersmart, trained individuals to come in and take responsibility.”

Until someone takes responsibility and ownership of big decisions — a leader with authority over all agencies — disaster experts warn that the recovery in the Paradise area will continue to lag.

'It doesn't matter what size they are; when they come to us, they're all … END_OF_DOCUMENT_TOKEN_TO_BE_REPLACED