You are here: Home / Business / There’s a problem with the human family tree

NEW YORK – The term “Homo sapiens” is no longer working so well. Neither is the closely related term, “modern humans,” used to describe us and fossils of long-dead people who looked something like us. It’s not just that “sapiens” means wise, and there’s no evidence that our species is any wiser than any of the other kinds of humans that walked the planet. The problem is bigger than that. It’s hard to be objective about ourselves, even for scientists.

I started considering the trouble after seeing a Twitter discussion among paleontologists who appeared to be upset by the way journalists had used “modern humans” about a new claim that fossils found in Greece date back 210,000 years.

What should journalists have called them? There’s no great answer from human history. The story has just become too messy.

Just a few years ago we had a nice neat understanding: Some 200,000 years ago, Homo sapiens arose amid a wealth of other kinds of humans — most notably Neanderthals in Europe and a group called Denisovans who lived in parts of Asia. But our kind, allegedly through our wisdom or some other attribute, won out, and, some 60,000 years ago, started to spread through the world, replacing Neanderthals and various other “also ran” humans.

Or so we thought.

Then scientists learned to read bits of DNA scraped from fossils and found, oops, what we thought of as our species was mating with Neanderthals, Denisovans and any other human species we came in contact with. This complicates everything, including the question of who gets to be included in our species category.

To further confuse us, some people who look distinctly like us — modern humans — got up and left for Europe before 210,000 years ago, back when it was thought only Neanderthals and other non-sapiens lived up there. The finding, announced in the journal Nature last month, follows another fragmentary find that would put modern humans in the region well before 100,000 years ago.

And therein lies the terminology problem. “Modern humans” has long implied a group of people that look like us, with our distinct rounded skulls, small jaws and chins. And also implies our single, direct ancestral lineage.

It’s not universally agreed upon that those early people in Greece were all that much like us. The fossil in question — a part of a skull — was found in the 1970s and showed the rounded shape more like people today than like Neanderthals or Denisovans. New technology allowed researchers to finally get their surprisingly early date.

There are plenty of skeptics who want more evidence than a single skull to show that such a migration happened more than 210,000 years ago, as the authors of the paper suggested. Others find it plausible. University of Wisconsin paleo-anthropologist John Hawks said it fits with genetic evidence showing that Neanderthals had genes from so-called modern humans.

There’s that term again. “It makes them seem more like people,” Hawks said of Neanderthals. Should we just call them all “people” until we get that figured out?

Our genus-species name, Homo sapiens, is just as bad, said Hawks, as it’s sometimes synonymous with modern humans, and sometimes it’s broader. Some scientists want to include Denisovans and Neanderthals as kinds of Homo sapiens rather than as separate species. And if the DNA evidence is right, many prehistoric people considered them part of the family.

One thing the fossil record is telling us is that mixing across species is not weird. It happens, after all, between different species of cats, of elephants, and between dogs and wolves. Which makes it hard to neatly categorize things into species — especially ourselves.

The new narrative of our origins contains a mystery at the center, because genetic evidence shows we are not a diverse species. Despite our mixed-up origins, all 7 billion of us are closely related. How did diverse populations — perhaps even multiple species — end up such a homogeneous lot?

Perhaps when they sort out the mystery, scientists can rethink all our terms and give us more precise ones. They would earn that title of “sapiens.”

Faye Flam is a Bloomberg Opinion columnist. She has written for The Economist, The New York Times, The Washington Post, Psychology Today, Science and other publications. She has a degree in geophysics from the California Institute of Technology. 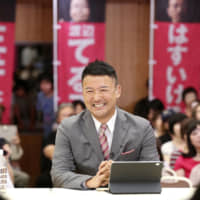 Is populism finally coming to Japan?
While populism is rising across the world, Japan has so far been immune to it. There is no Japanese equivalent to French politician Marine Le Pen, U.S. President Donald Trump or Philippine Presiden…

'It doesn't matter what size they are; when they come to us, they're all … END_OF_DOCUMENT_TOKEN_TO_BE_REPLACED